I am currently using Tivimate ver. 4.0.0(premium) on my Nvidia Shield Pro. I want to update Tivimate to its most recent version 4.1.0 but don’t want to lose my current setup. I tried going through the Google Play store first, it said there was an available update which I think would have updated my version without making any changes but it came up telling me “Can’t install TiviMate IPTV Player”. Maybe that has something to do with the recent Update to Nvidia i did. I did run into problems, like most people it seems, but was able to get everything back up and running. I know on the Troypoint App, which I have, you can do a rapid install of the newest version of Tivimate but I’m concerned it will either over right my current version of Tivimate or install a separate version leaving me to have redo everything…which I’m hoping to avoid. Anyone have any insight into how I could achieve what I’m trying to do?

If you installed it with googleplay I would stick to any updates through them. It will just update your software(app) and not overwrite any of your settings.

@Joela63 Do a backup on your TiviMate so you’ll have it in your files in case something goes south on the upgrade.

I didn’t install it from Google Play. I probably used Downloader to install it originally. Also for some reason Tivimate is not allowing me to do a back up. Keep getting the message “Failed to create backup”. I think it might have something to do with the recent Nvidia update effecting the memory access.

It’s not allowing me to even make the folder “tivimate_bu”.

hmmm. could be the update as many users are having various problems. Hang tight and dont do anything drastic… im sure a fix is heading out soon with this many issues.

Will do. Thanks for the help TXRon.

Use the system picker. You will have to do a few extra steps, but it will work. Use this also for recordings until nVidia fixes all the issues they caused.

I posted a lengthier post on how do this.

Gonna post this here instead of creating a new topic, because this is related to the Android 11 update. Ok, here’s the solution for storing backups and recording in Tivimate. When you go to do a backup for the first time use the feature named, “System Picker”. Then go back to you file explore and scroll down to find it. Then you can rename the File. For recordings I made a file in the same place. Then the path for your recordings is set.…

Using ES File explorer I created a folder called Tivimate and then sub folders of Backups and Recordings. This has worked well for me for a couple of years now. Just make sure to backup Tivimate on a regular basis and delete your older backup files to reduce unneeded files. I usually keep my last 2 backups. In keeping just a couple of backups you don’t have to worry about space if your not using external storage.

ES is a good one, too. I used X-Plore for Tivimate. I have both. Probably should consolidate down to one or the other. lol Imho, X-plore is easier to navigate, but ES has more options. I like the “Sender” featurew in ES.

Just keep in mind if you are using Tivimate on a Nvidia and did the update. You will most likely need to use the “System Picker” feature to be able to make a file to store your backups and recordings.

I think what you’re missing is the fact that the majority of us are using an external thumb drive plugged into the nvidia shield. The recent update is preventing us from accessing the thumb drive to even make new folders for the backup. In my case I can’t even access it through es explorer.

I also don’t even see the “System Picker” option you’re talking about.

I must be lucky because the update has not effected my external thumb drive. Also, I do not have to use system picker as I can directly access the folder I created for backups, but can use the picker if I wanted to also.

I too, have an external drive, but you do have internal storage also. The System Picker will find a place in X-plore or ES to put the info. All you will need to do is rename it, if you want to.

Using X-Plore for this demonstration.

First go into your File Explorer and create a New Folder, (Ex: Test 1)

Scroll to where you created your folder and click it (Pro Tip: Files are in alphabetical order so name your fold accordingly. A’s are up front and the T’s (TEST) are way down there! lol

I made a Tivimate folder and then made a Backup file and a then made a recording folder. So, when you record or do a backup select the appropriate folder to do so.

Hopefully the dingbat tech gurus will sort their mess out soon! 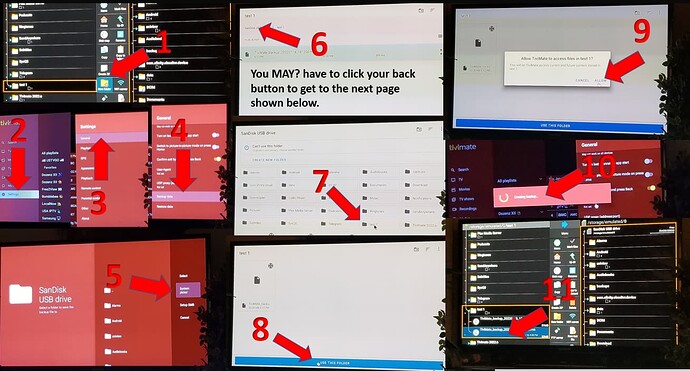 Then most likely you made your folder for internal storage. Also, the DCIM has permissions and can also be accessed. So making folders there will most likely work, too, but that basically is what the System Picker is doing. It is just finding a place where the system has access.