Great Review, will probably upgrade if they discount during holidays. Love how you showed the step by step

I got mine yesterday and hooked it up and spent an hour or so customizing it. One issue I had is that I tried to use the HDMI extender from a FireTV Stick 4K and I had static on my screen and the video would cut out. Switching to the HDMI cable that came with the MAX fixed it. Must have changed something with that for the new device.

I noticed my IPTV works better now without buffering even with multiple screens in Tivimate. Not sure if it is because it has more RAM or is slightly faster or what but happy it seems to have solved that problem which was getting pretty annoying. I have the Amazon Ethernet adapter so it wasn’t the WiFi.

The dedicated app buttons also work flawlessly while running Wolf Launcher, which I was a little worried about.

I would love to be able to program the “TV” button on the new remote to launch Tivimate. Anybody know if this is possible? When I press it it takes me to my Launcher, so it’s basically just another Home button.

Thanks for another great and helpful video @TROYPOINT!

How to remap the App Buttons on Fire TV Remotes with Remapper (Updated April...

The app buttons at the bottom of the newest Fire TV Remote and Fire TV Edition remotes can either be fantastic or useless. They're great if it's an app that you use often, but they're a complete waste if you don't even have the app that they're for...

Hey Miki. That’s cool but don’t think it can do anything with the TV button on the new remote. I don’t think it is mapped to a specific app I could uninstall to make this work. I believe it maps to the “Live” section in the stock launcher, but with a custom launcher installed it just takes you to the Home Screen.

@jizzzoe
From what I’ve read, even with Wolf launcher you can remap say Hulu Or Netflix button or one of the other 2 on the remote to load any app you want. Now as I don’t need any of the 4 junk apps presently mapped to the new Firestick remotes at the bottom and I don’t need any “new” buttons I have never tried it. However if you are concerned then go back to the stock Amazon launcher using the launch manager, remap and check key function, if ok then restart Wolf launcher and the key should start your desired app same as it did in Amazon launcher.

But I’m talking about this button… 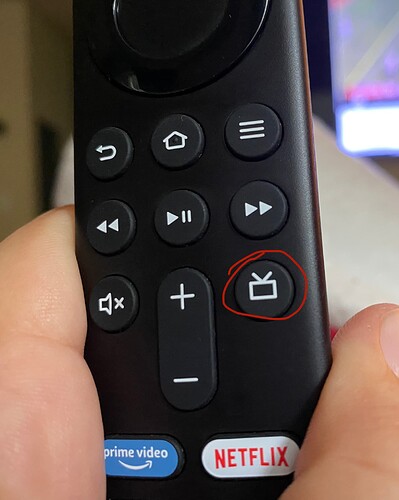 Ok I’m kinda lost. What does it matter which button you remap to start Tivi? As that TV button isn’t an “app” button I don’t think the code will allow remapping. Any one of the 4 “app” buttons can be remapped.

I use all 4 of those apps. I want to remap that new TV-icon button

I haven’t been able to find any solution to remap the “guide” button. Sorry.

I received the new Firestick 4K Max a couple of days ago and installed it with a SanDisk 3.0 128gb external storage drive. I sideload a lot of apks which take up most if the extra RAM so all I want is somewhere to put these apks. The fact that they automatically go onto the external drive is exactly what I want. I accidentally moved an apk back to internal storage and saw that it couldn’t be moved back so I just deleted and reinstalled to get back to external storage. Works for me, so no complaint. However, the WiFi 6 is really why I bought this. I have a wiFi 6 router and although I normally get download speeds of around 350-400mbps, with the Firestick Max the speed bumps up to around 480-500. I use a Nvidia Shield Pro on my main tv, but Firesticks on the 4 tvs in my home with the Max in my bedroom. Not disappointed at all.

Hi I’m new here and maybe not as ‘firestick conversant’ as many others - but is it possible to record progs on firestick, say to usb or even firestick memory?
I only say this because I so wanted to record the recent Tyson Fury fight from the ungodly hour of 4am in UK (Totally farcical) but could only do it from my Technomate TM5402HD M3 sat receiver - and worse still in Polish!

This topic was automatically closed after 30 days. New replies are no longer allowed.