Early reports are its a disaster. Again.
Don’t update!

well it wont send me the update, so I guess theve pulled it before more damage can be done.

If it’s an actual disaster, happy they pulled it. I’ll look later on mine when I hook it up once everyone is in bed

Don’t know how this got out. Rumor is it came from a bat in the Wuhan region of China. Who can say for sure.

Guess I’m going to have to clear data and cache in the BuzzTV OTA app. 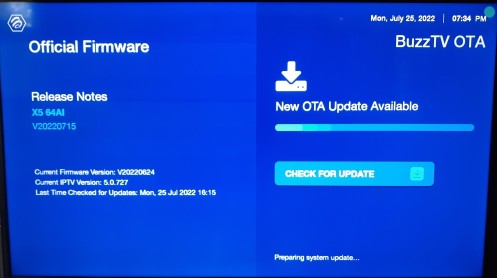 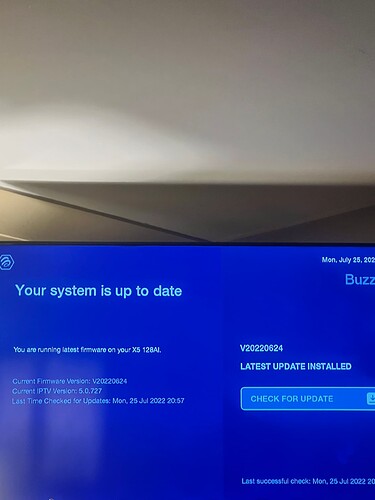 I was watching a program on Prime Video yesterday. The program stopped & a dialog box opened up saying there was an update for my device. No information as to what it was made me think something was fishy. There was a ‘yes’ box & ‘no’ box at the bottom. Clicked ‘no’

I even checked the OTA icon & clicked on ‘Check for Update’ & nothing!?

Does anyone have an idea what it was i was offered - a legit update or a virus perhaps???

Oh, btw, i spoke to a high up senior tech yesterday - he’s in Las Vegas. I was having some issues with some apps on the box - phoned the Toronto office who told me they would pass it on & i would get a call in a few minutes - sure enough, in about 5 minutes, the guy called. Spent 1/2 hr. with me dealing with my issues. He said that there was going to be a new box released later in the year!

That’s really odd. Never have seen an update pop up while watching anything

It was quite startling to say the least. I would have figured i would have been offered an update upon starting up the box, not out of the blue like that!!

Will have to check tomorrow if i get offered it again. Funny thing was, as i said, i checked OTA for updates two or three times after the pop-up & nothing, nada!

so did I hear this right…the remedy they have come up with is to release a new box? disgusting

If that’s true, I am highly disappointed. Should have just bought another Shield Pro

guess we just chalk this one up as leason learned. Never believe hype.

Regardless, I still enjoy using it. Their own TV client is really nice. It is fast and has a ton of storage (more than I need). I turn the Shield Pro off and X5 on at night when the Fam is in bed

The senior tech told me about the new box being worked on for release - he mentioned something about it but i was too busy trying to rectify some issues i was having with Prime Video & SmartTube New.
Really nice fella, spent time answering all my questions (just like you guys do!)

I thought, with the issues i was having (mind you, just with 2 apps but very important ones to me) that i was going to have to do a factory reset. I still might have to depending on whether the apps start up or the screen, when you click on the app’s icon, just shows what appears like a restart of the box but the blue light stays on. The tech was well aware of the issue & suggested i change from ethernet to wi-fi. Did that & all was OK (yesterday anyways)

I want to connect a 3.0 500G SSD. Does anyone do it that way or just use the 115G of internal storage for timeshifting/recording??

If anyone has used both, do you find one better than another? I find recording is as good using TiviMate on the Shield Pro as i do on the x5. However, the ‘timeshifting’ seems a bit choppy, not bad but noticeable using internal storage.

Another thing (sorry) - tech told me to format SSD exFAT - when i plug it in, will it show internal or external storage. I believe on the Shield, it both formatted the SSD & automatically added it to internal storage but i’m not 100% on the latter.

Wanted to make a short epilog to the initial post. On Friday, Buzz moderator allaboutbuzz posted:

It will revert you back to BuzzTV X5

Please note when taking this update, you will lose Server Settings of IPTV.
This is mentioned in the Release Notes.

A thread at the BuzzTV forum documenting the above by X5 owners was deleted. Probably not a smart decision.

Sounding more and more like a clown show over their and they are acting out the firetruck skit.

My X5 is working flawlessly and i absoulety love the recording aspect with my 2 iptv providers
128gb ram and a 256gb sd card as extra storage and a 256gb usb stick also added for timeshift
i’m so happy i could cry!..lol
i never take any updates untill i read about them a week later? yep and didn’t download the last two updates and my box luv’s it and is working like a dream
my girlfriend won’t leave the house now…lol
i didn’t know all that content that’s directed at women was going on? i just watch sports and new movies…who knew?
iptv recordings are way more reliable than tivimate,just my opinion
and the nfl,usfl and xfl are all about to start,my baseball team is kickin a*s
and nba training camp starts at the end of september?
i’m in freakin sports heaven…i luv my box