I saw that there was a previous thread like this, but it didn’t quite match my problem so I’m starting a new topic. After months of using Wolf Launcher on my Firestick 4K, suddenly the stock launcher keeps returning as the default launcher on my home screen. Whenever I open my Firestick homepage, it comes up with the Stock Launcher forcing me to select the Wolf Launcher again. When I go to the Launcher Manager and select “Enable Custom Launcher", it returns with the Stock Launcher anyway. I seem to have lost the ability to make Wolf Launcher my default.

I tried uninstalling and reinstalling Launcher Manager and Wolf Launcher, but nothing changed.

Does anyone else have this problem? Is there a solution to this? Thanks in advance for all who reply. 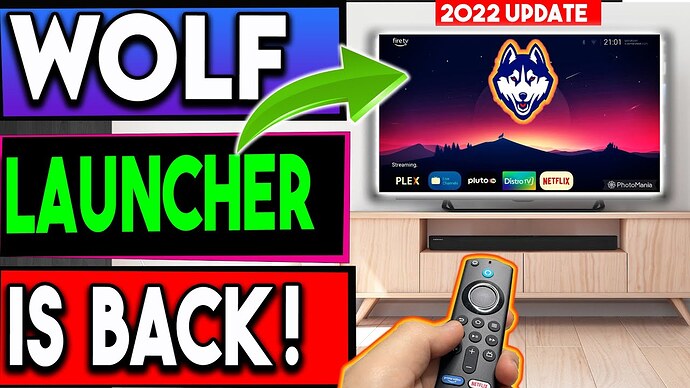 🔴WOLF LAUNCHER IS BACK ON ALL DEVICES ! 2022 UPDATE | TechDoctorUK

Wolf launcher is back. If this stopped working for you then follow the steps in the video to get Wolf launcher working again. ✅For business enquiries: tdoctoruk@gmail.com 📌Follow me on Twitter – https://twitter.com/TechDoctorUK #wolf #launcher...

Hello @sholly1 a recent Amazon update has blocked this from working. You will see that Miki is posting an alternative but keep in mind that type of setup, you can no longer use the home button as it will go back to the default UI for Fire TV. But, you can just use back buttons instead.

Amazon is currently releasing two updates that will block 3rd party launchers such as the extremely popular Wolf Launcher. This has caused some furious Amazon customers and we want to hear your thoughts in the comments below after reading this...

Ended up blocking the update on my router to stop Amazon from doing this update. I’d you did not catch this activity in time you are stuck. – unless you do to modification mentioned.

Click on the Wolf Launcher tab (NOT launcher manager) in your apps list and it will change back to the Wolf launcher. After that refrain from hitting the Home button on the remote. That’s all you need to do any time the stock launcher reappears.

go to manage installed APPS and select wolf launcher. Select the option from list to restart app.
works for me.