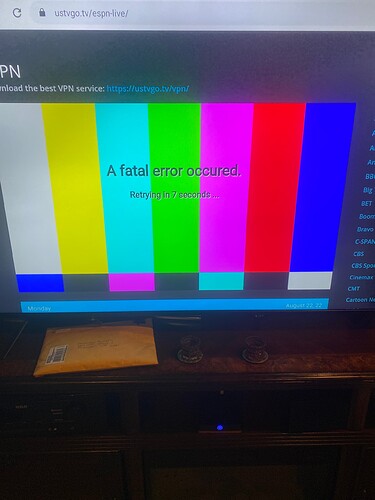 USTVGO is the most elusive streaming app known to man

… And there is no set answer as its always changing. Ask any m3u chaser here on Troypoint and most have given up. There is a clone out there ustv247 you might wana chase down, it seems to stay put a little better but no promise.

@Punisher Have you tried changing servers? Chicago and Detroit working perfectly for me.

That happens occasionaly to me, and I just change locations on vpn…

Which android box? What version of operating system do you have?

(1) I get the FATAL ERROR “often” (maybe, every 20 minutes!) using Silk on my Firestick 4K (Cox Cable Gigabit). Backing up to the channel list and reselecting the channel solves the problem (until the next time, a PITA). This may be a function of my VPN, see below.

(2) I use ExpressVPN and find that VERY FEW channels are blocked. The notable ones I’ve found are HBO, Showtime, Golf Channel, and there are probably a few others (but Cinemax WORKS!). I tried changing VPN servers a few times but no improvement.

(3) If I access USTVGO on my PC with Chrome and “cast” to the TV, again using ExpressVPN, the fatal errors go away but the blocked channels remain the same.

(4) My Silk browser will not go to any ustvgo.tv apk site I’ve found, and (it says something like “outside of market” or some nonsense like that), and if it does the apk won’t install ;o(. Hence, I have been unsuccessful in installing their app on my Firestick 4k.

Other than that, Mrs. Lincoln, I loved the play…

Yea, when I was using the FS4k, I had the same issues. Try using USTV247, think that worked better if memory serves…