How to fix PlutoTV on mytvonline3

Does anybody have a fix for PlutoTV on mytvonline3. Everything loads fine but when a commercial starts the stream freezes and won’t unfreeze unless I switch channels and go back. This doesn’t happen on any other players. Any advice would be appreciated.

I cant test it cause…well you know

… It could be the source?

Is there a special reason or option that makes you want to use it on mytvonline3 instead of another player which you say it works on?

Just that you can see and access your favorite channels from the homepage of Formuler when using mytvonline3.

I get it. So the ease of having channel shortcuts right there. What if you used a different launcher that let you add channels shortcuts to the homepage?

I have the paid version of tivimate and wolf launcher also setup on this box right now because I like using widgets on the homepage, a weatherwidget, an ip location widget and a ram and storage widget which I can’t put on Formuler homepage. Do you know how to put channels from tivimate to show up on wolf launcher? I’m not too tech savvy. This is my fight wolf launcher or Formuler launcher.

The PlutoTV m3u playlist in Tivimate.

Can you try what I just tried? In Wolf Launcher select a widget called Favorite Application and then choose Live Channels and then you can select Pluto TV from there. It works on the Shield, don’t know about Formuler.

As soon as I get near my tv I’ll check that.

Be warned, next thing Papa is trying to do is make the formuler make his lunch

Kinda like those cars that drive for you? Don’t know that he’d be safe with either option, lol. About the only suggestion I’d have would be to set the Formuler on top of the microwave. It’d just be closer and easier.

Why not just download the Pluto app and then you can put that on your Wolf launcher. 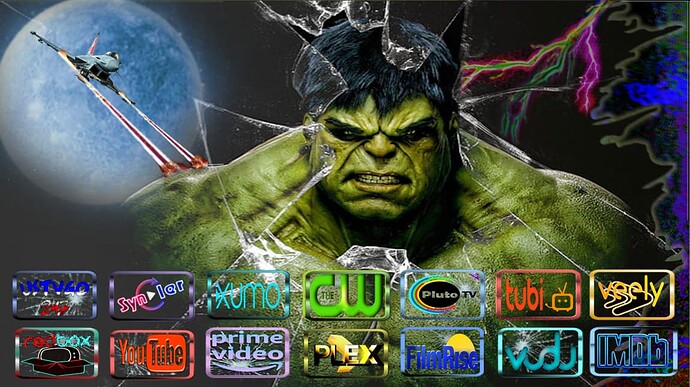 Because that would be too easy and where’s the fun in that? (said with friendly sarcasm) Cool launcher by the way, like those app banner icons a lot!

All apps are hidden. My utility apps scroll down from the top and the media apps scroll up from the bottom. The entire background is an invisible hot button to launch Tivimate. I wish some geek out there would figure a way to have an animated background!

The banners I made using a few things on my laptop and then I sent them to my x-plore on my device.

Very nice. You could always use a gigantic gif as a background. It would look animated, in a cheap sort of way. LOL

Nah, I want the plane to zoom in and have the machine guns rapid firing and maybe even a little smoke and blood flying around.

Yeah, that would be cool. It’d be great if I could the Hulk running forward and then have the glass break. I could probably do that in my animation app that I have. Haven’t messed around with that app in a long time. Easier to use all the make your gif apps that are abundant on the net. lol