I have a TiVo Stream 4K Stick. I had Syncler on it and it was working great. I uninstalled it so I could walk my brother through installing Syncler on his Android box…going step by step with him.

I have attempted to reinstall it from both the Troypoint Rapid App Installer and the Google Play Store. It downloads and I click the “Install” button. It appears as if it is going to install without issue as the progress line moves near the end, but the it stops and I gat a white screen with the message “App Not Installed” on it. The only option at the bottom of the screen is “Done.”

I have included a photo of the message I keep getting.

Not sure why I can’t install it now. I have made sure that Syncler nor the Installer are not still on my device.

Any help with this issue would be greatly appreciated.
Thanks! 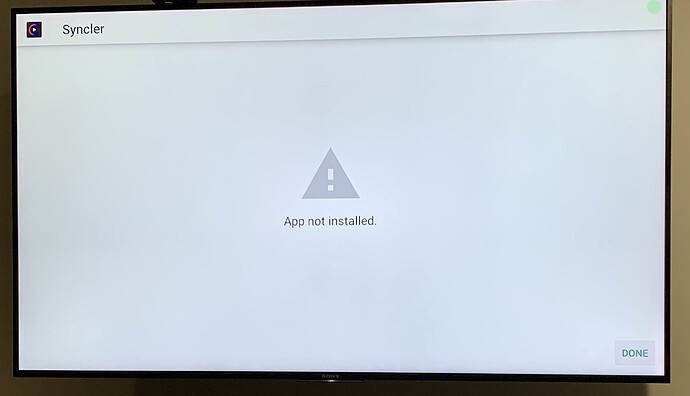 Syncler - One app to sync them all | Official site

Syncler - One app to sync them all. Introducing the best syncing app there is.

Thanks I will check it out tomorrow thanks for the info

I just tried it. Same result. I keep thinking that I’m going to have to reset my device back to factory settings, but the idea of having to reinstall every app I use is more than I want to deal with. That’s why I came here!

There has to be a solution that does not involve a factory reset, right?

I have done that several times. Every time it fails, I go in and uninstall the Syncler Installer and try again.

I just had an idea. I will report back.

Wow, it worked! I used the ES File Explorer to go see if the old APK was still there. There were actually two Syncler APK’s in the Download folder (where I originally looked), but there were also Syncler APK’s and files in the Troypoint folder from my attempts to get it from there previously.

I deleted them all completely, including from the Recycle Bin, then went to Google Play and it installed immediately.

I hope that works for you!