I started getting ads on my phones screen so I decided to run a scan . Don’t install this app on your phone . 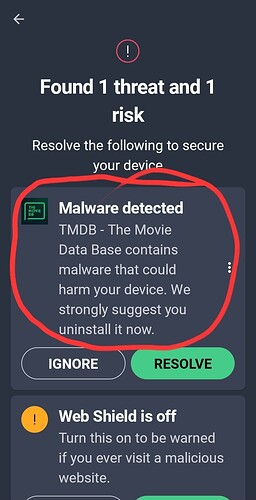 Doesnt mean it has malware. False Positives. But what you should do is actually get the name or the info of the malware and i will research it.

I dont use that app period. Keep in mind some apps will appear to be malicious when they arent its just the scripts used in the brackground can be used for malicious intent.

Well it did something on my phone that I didn’t want so the app is gone . I don’t want ads for games taking my screen over . That’s a big no no . I never really used the app in the short time I had it anyway. Just thought I’d let people know.

Most modded apps in this section are flooded by adds inculding games and such. Its very common and will register as malware depending on the app. Just delete it.

Game apps, cinemahd and a whole whack of others have embedded adds. All i can say is becareful with these types of apps

Yes I deleted it. It wasn’t even a streaming app. Just giving people a heads up so that they don’t have to deal with ads taking over their phone .