This Surfshark Review was written by Troy from TROYPOINT after using the VPN service on a regular basis for approximately three weeks.

This unbiased Surfshark Review covers EVERY feature and detail we could think of.

Was very impressed with this one, enjoy!

Surfshark Review - State of the Art, Fast, and Feature-Rich VPN

This Surfshark Review was written by Troy from TROYPOINT after using the VPN service on a regular basis for approximately three weeks. Surfshark provided

Love the review! Thanks for the unbiased straight shooting information. I’ve been using Surfshark for almost a year now and seems to keep getting improved upon. I’m glad you talked about the Kill Switch as I’ve mentioned in previous posts of how impressed I am with it.

I’ve been using Surfshark since 2020. I’ve used several of the biggest names in VPN’s and in my opinion, Surfshark is now the best VPN service available. They also appear to constantly seek to improve while other providers stand still.
Great review!

Great review, I’ve been with Surfshark since the early days. Never no real big issues that I couldnt deal with including real debrid…never a problem(at least for me) I am paid up with them thru 2025 due to I always grab deals and tack them on. Support has always been top notch either in chat box or phone.

I guess keeping Surfshark my little secret is over

Nice review Troy…my question is: am I the only one that doesn’t have the rotating IP or now the Camouflage option? I have what I think is the latest version 2.7.7.5…

Just checked my phone is at version 2775 like yours. Look in advanced settings. That is where rotating IP etc is found.

I mainly use SS for streaming…only thing on that app under advanced settings is a box/button for “Use small packets”…checked on my firefox addon SS & nothing there either…don’t use anything on my phone, so…?

Edit: Just looked thru Troy’s tutorial a bit closer & saw the 2.7.7.5 version in one of his screenshots, so he has it & you have it…but no soup for me! Guess I’ll need to get on chat & see what the deal is…

Hello @pangaeatech right now I only have that on my desktop application.

This screenshot is from my tablet. I have SS installed on my 2 laptops, 3 nVidias, Samsung S8, and a Fire HD 10 Tablet 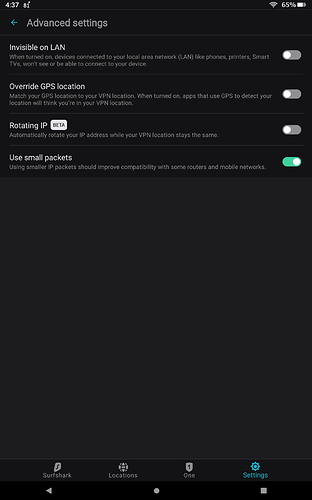 If it’s still in Beta, that’s probably why I don’t have it…have you found that Camouflage option anywhere? I must admit…I like both of these new options a lot…I think…at least on paper

Is that the “Invisible on Lan” ?

Not sure exactly how it works, but if it keeps me more anonymous from my ISP et al when I’m streaming…then that’s a good thang. I just like the sound of Camouflage mode.

Thats what camouflage does. Its similar to nords obfuscation process.

I don’t see the same settings on my Shields as I do on my phone and tablets. The settings in SS for the Shields are missing the rotating option and that invisible on Lan.

My laptops have the rotating ip and the invisible on Lan, but some settings are different.

So, it looks like they have a difference between devices. I primary got SS for my streaming on the NVidias, and I liked the idea of that rotating ip. I think I will shoot them an email to get some clarification.

UPDATE: I just got done chatting with a customer service rep and she said the developers are working on getting all the VPN settings and features sent out to all platforms. So, I guess they are coming soon.

This is the link to their promo vid she sent me.
What’s new in Surfshark | March 2022 - YouTube

Excellent…way to set a fire under em’ PF

I mostly use Firefox on my laptop & sometimes Chrome…both have addons from SS…funny thing is, there’s basically no loss of thruput speed using these addons…compared to streaming tests on the tv w/SS. Might be a slight delay at some websites…but mostly unnoticeable while dashing about on the net. Still no rotating ip set up on these addon versions of SS…but I’m guessing they’re working on them also. Have never put SS on my phone…but may try it out just to see how it works.

Surfshark is always slow to roll out changes, guess they are just trying to get it right from the start.

I wasnt gona go there…but there ya go